The Bloody History of Medical Needles

Posted at 13:46h in Needles, Phlebotomy Equipment by Scott Eggenberger 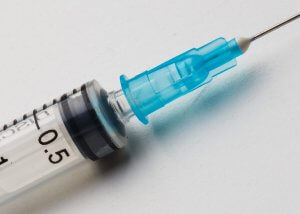 From Denver to the Australian outback, needles and hypodermic syringes are one of the medical industry’s most fundamental tools. Phlebotomy schools teach how to use them, but few people know where syringes actually come from.

It turns out that medical needles have a history stretching back thousands of years, involving some of the greatest and most infamous men in history. How did the crude tools of ancient hunters become the safe instruments used today?

Archeologists and medical historians suspect that the first syringes evolved from weapons like poisoned darts. Primitive hunters would dip the tips of their arrows in lethal poison before firing them. While these hunter-gatherers certainly never attended any number of phlebotomy schools, they were adept at injecting substances under the skin of their prey and drawing blood.

Long before phlebotomy schools, the Romans were administering subcutaneous injections to willing patients. Unlike the ancient hunters, these doctors actually hoped for a positive effect.

Classical mythology tells the story of a beautiful nymph named Syrinx. While playing in the river one day, she was surprised by Pan, the mischievous god of shepherds. Pan loved her, but she was afraid.

In a desperate attempt to resist his advances, she transformed herself into hollow reeds by the edge of the stream. Saddened, Pan gathered the reeds and used the tubes to construct a musical instrument: the panpipe.

Historians know very little about the actual mechanics of Roman injections, but the tool they used was called a syringe. Probably because the hollow tube used to inject the medicine reminded them of Syrinx and her reeds.

Sir Christopher Wren, the genius who designed St. Paul’s cathedral, experimented with a primitive syringe. He injected dogs with opium to test the effects. Once he even tried to inject a disobedient servant, but the man became so nervous that he passed out, effectively ruining the experiment. Fear of needles has a historical precedent.

It was a Scottish doctor, Alexander Wood, that first used a modern syringe for medical injections in 1853. Legend has it that Wood’s wife was the first addict to die from a drug overdose.

Initially, needles were used only for injections. Many years passed before doctors began using them to draw blood, and phlebotomy schools began opening.

Today’s needles are disposable, safe, and relatively painless. Strange to think that they developed from poisoned arrows.